So, let´s take a little break from the #memoirsofahitchikker series because I´m slightly (extremely) elated that Elephant Journal has picked up one of my poems and published it on their site. EleJ is an independantly written and published magazine about,

"the mindful life ... yoga, organics, sustainability, conscious consumerism, enlightened education, the contemplative arts, adventure, bicycling, family…everything. But mostly it’s about this present moment, right here, right now, and how we can best be of benefit, and have a good time doing so."

Yep. Hippies. And what beautiful hippies. Anywho, if you´ve never heard of them, go check them out and check out their articles and other such goodness.

Oh, and if you missed the link camouflaging in the first sentence of this post, here it is again: Evolution

Pura vida!
ERK
Posted by Unknown at 10:37 AM No comments:

Ricardo picked us up on the outskirts of Trelew, a literal two-horse town with a picturesque main drag about two city blocks long. As promised, Daniel had dropped us off at a trucker stop right on the border of Trelew, where he had to be for some mysterious reason he hadn´t elaborated on. As much as people have cautioned against walking the highway and hoping for luck (for various reasons, the most obvious being that if you are caught in the middle of nowhere when night falls, you´re kind of screwed), it seemed like it was where all of our luck was being found. So, after a few failed attempts, we started hiking down the highway, chasing the afternoon sun, and in no time we hitched a ride. Easypeasy.

Ricardo pointed out a strange looking animal he called a Guanaco. It looked like a llama, but he insisted it was different, and continued to tell us about how he unknowingly ate its meat for some time. "Delicious," he said. "But they should have told me before I ate it." He paused for a moment as he passed a truck, then he continued, grave and serious, as if surviving the brief encounter gave more weight to our lives, "Here, any food that they say is Patagonica, assume it has Guanaco meat."

We all fell silent for some time. Maybe from Ricardo's wisdom. Maybe from the persistent drone of the unchanging landscape. It seemed like we had all fallen asleep. It seemed as though even Ricardo had fallen asleep at the wheel, and by some Argentine voodoo, he was able to continue driving with his eyes closed, weaving through trucks and slower moving cars with unnatural ease.

A British tenor singing a Spanish song in the style of opera came on and almost as if on cue, the road changed. The monotonous flatness of the countryside morphed into hills and cliffs. And in response, the once faithfully straight road turned into a snake. Dark green foliage clung to the dusty red cliff sides, with canyon-like valleys carving through every so often, allowing glimpses of the dark blue calm of the sea to the east. All of this hung on the backdrop of a light blue sky smattered with white-washed clouds. It was beautiful.

The cliffs grew in size, or the road carved closer to sea level, making the cliff look larger by way of optical illusion. Whichever may be the case, they became more impressive and I became more and more aware of my tiny, so easily measured mortality. As we entered the boundaries of Comodoro Rivadavia, the green no longer clung to the dusty red earth. Even the red faded. The earth was just dusty.

The city of Comodoro Rivadavia was strange. After being on the open road for so long, drowning in such an unchanging landscape, suddenly being sandwiched in a city carved between cliffside and sea felt strange. Not good. Not bad. Just strange. There was an intangible awareness suddenly forced upon me. An awareness of what, I had no idea, but I wouldn't mind finding out. The city reminded me of the video game series, Zelda. Specifically, the cave city of the Gorons. The people running about industrious and serious, dwarfed by the scale of their surroundings.

Butted right up against semi-skyscrapers, the dusty gray cliff loomed. On its face were carved lines, like wrinkles drawn in with a ruler, zigzagging with industrial vehicles made for mining deep into the earth, sucking out precious minerals. The cliff looked pale, like a tired old woman fighting some ailment born of being malnourished.

The streets creeped up and down steep hills, reminding me of Ankara, Turkey. It was a city clinging to a cliff so ready to unburden itself of the foreign population, ready to let everything slide off at any moment. Probably from the mines, or the fact that many of the streets were nothing more than unpaved gravel paths, even the most minute of motions lifted dust into and around the air. Comodoro Rivadavia was shrouded in a constant cloud of dust.

La Ciudad Gris, Soledad had called it. The Gray City. Having never been, and only hearing of the city, she admitted that she had no idea why. Walking through Comodoro Rivadavia, I suddenly understood why. 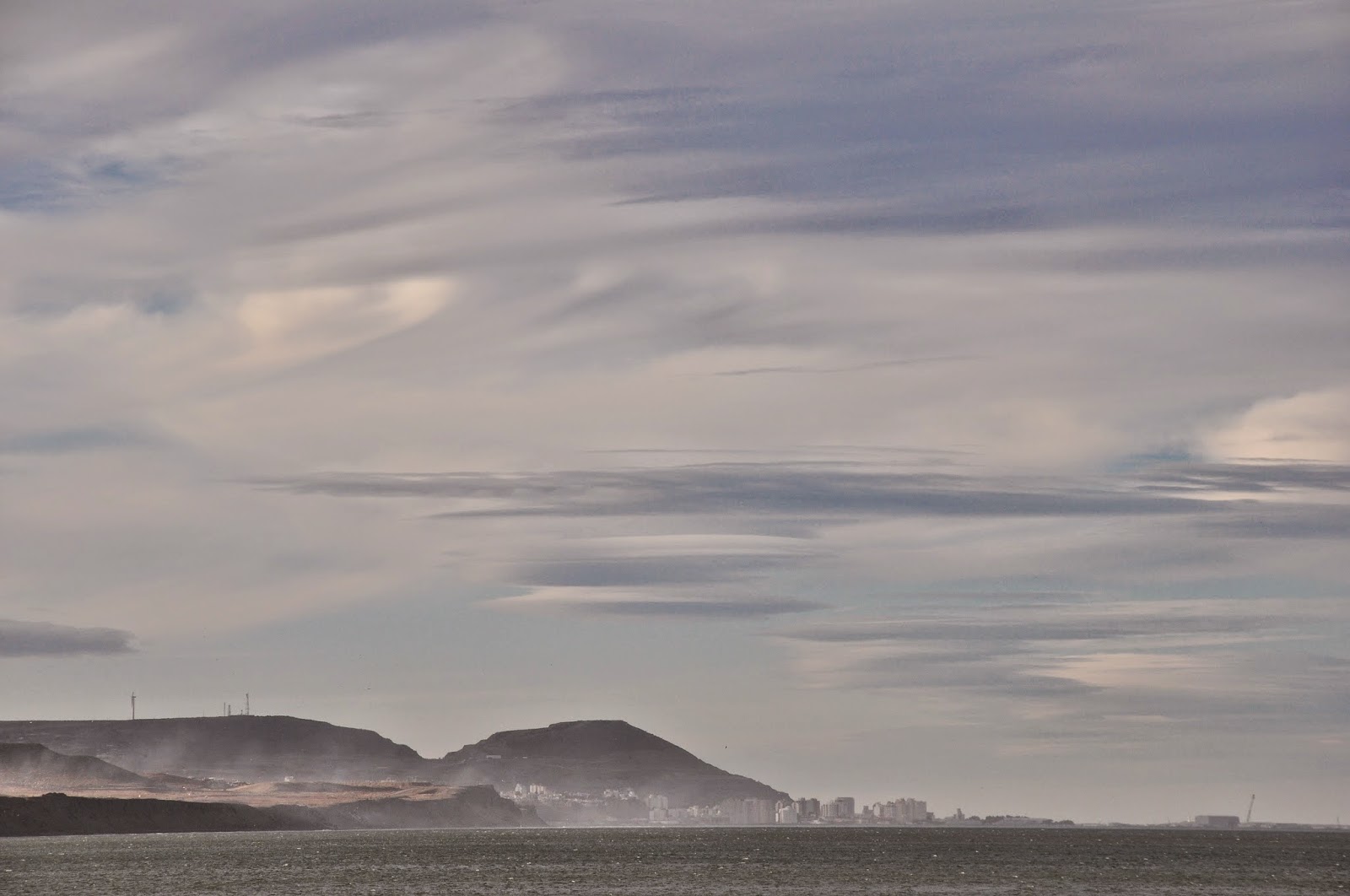 Posted by Unknown at 9:36 AM No comments:

A little after 6AM. Lyndon's alarm rang.

A few minutes passed and mine rang.

It's always hard to crawl out of bed, adventure or not. After soaking in the last remnants of warmth from my lent cot, I finally, rather begrudgingly, got up and prepped for the trek ahead.

Lyndon got up from his cot and did the same. When we were ready, Lyndon knocked on Javier and Sol's door to let us out. I could never wake people up. Sleep has always held such a sacred space for me that I've always found it extremely difficult to cut anyone's dreams short.

We hobbled down the stairs, still a bit asleep, out the front door, through the gate, hugged and kissed Javier and Sol and started heading off.

"Hasta la vuelta, chicos!" They chased us with one last sentiment. Until your return, kids!

It's always a little bit more difficult to hitch a ride within city limits, so with Javier's suggestion, we walked to a bus station and took a bus and got off at a trucker stop near the edge of the city. The same exact spot Miguel had dropped us off almost two weeks ago. The sun was just beginning to rise. We wandered around asking trucks for a hand in helping us continue on our journey. We hobbled around awkwardly striking up conversation with anyone behind a wheel for a few hours without any luck until Lyndon suggested that we walk down the national route and throw our thumbs up into the air, like we did at Bahía Blanca. Out of ideas myself, and feeling a bit low after being turned down so many times, I agreed. So we walked down the side of the highway, taking turns strumming random chords on the guitar while the other stuck out his thumb at anything with wheels.

Anyone who's hitchhiked anywhere will tell you that rejection is normal. Some go days without successfully hitching a ride. Luckily, Argentina's asphalted backbone, Ruta 3, had been kind. And in the crisp Patagonian air tampered by the hot sun blazing across the flatlands of southern Argentina, a black SUV veered off the road onto the gravelly shoulder of the highway.

"You guys coming or not?" A middle-aged man's head popped out the window, yelling in our general direction.

Accommodating our packs into the back seat, we settled in, Lyndon in the back with the bags and me in the front. Without much more than a smile and a hey-how's-it-going, we were off. Most will say no, some will altogether ignore your existence like some phantom from a Jack Kerouac novel. But, luckily, all it takes is one smiling soul to pull over and the journey continues.

We did the normal pleasantries, introducing ourselves, describing our faraway homelands, searching for something in common for interesting conversation. His name was Daniel, and he liked to practice his English, so we spoke in this lingua franca, each straining to neutralize his accent. It took some time before Daniel even asked where we were heading. Ruta 3 is long, stretching north and south. Wherever we were heading didn't really matter, since we were heading south just as he.

"We're heading to Comodoro Rivadavia," I said, "we've got in touch with another traveler from that city and he's agreed to house us for a bit."

"Ahh, that's kind of him," Daniel said, not looking away from the road. "Well, I'm headed to Trelew, so I can't take you all the way there. But I can drop you off at a petrol station where a lot of truckers pass by so you should be able to make it to Comodoro Rivadavia by the afternoon."

"Great," I said smiling, still not fully believing our luck with hitchhiking. "That would be really helpful!"

The conversation drifted toward Australia and it's sun-drenched beaches. I looked out the window looking for the random llamas dotting the vast landscape.

Much earth.
Posted by Unknown at 8:58 PM No comments: