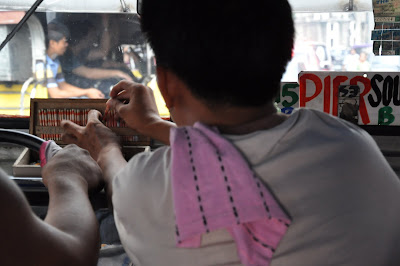 Image: A jeepney driver with a very particular way of collecting fare
Man 1 - You're leaving already? Didn't you just get here?
Man 2 - Yeah, sorry bro but my wife just texted me. She has malaria.
Man 1 - Do you need a ride to the hospital?
Man 2 - Nah, I've got this. I'll just text you when I have some free time next week.
True story.
Posted by Unknown at 11:11 AM 2 comments:

Here is yet another well-worn traveler, Danielle. Be sure to check out her awesome photography on her Flickr account. I hope you enjoy her stories as much as I did, making your hump day a happy one!
Name – Danielle Koffler 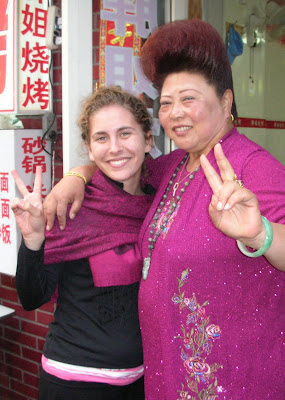 In Qingdao, China
Site – Wake Up and Dance, http://www.wakeupanddance.com/
Occupation – I am an uncertified English teacher in Korea. I get paid well, don’t have to pay rent, and get to live abroad. Living the dream!
Birthplace – I was born and raised in Los Angeles, California. Although I am an Angeleno by birth, I feel more at home in Colorado, where I went to university.
Current Location – Seoul, South Korea 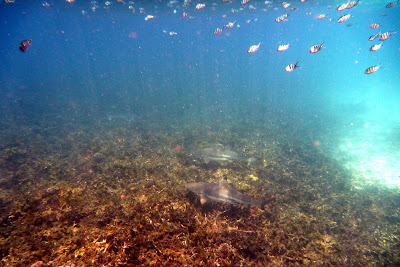 Black Tip Reef Sharks off the coast of Koh Tao, Thailand
Trips Made – I traveled around the world on Semester at Sea in 2006. I was fortunate enough to visit Japan, China, Vietnam, Burma, India, Egypt, Turkey, Croatia, and Spain during my three months on the MV Explorer. After graduating from university, I moved to Thailand to teach English for a while and then backpacked solo around Asia for four months. I visited Nepal, South Korea, China, Tibet, Laos, and Cambodia during that time. After going back to the states for a few months, I found myself back in Thailand on the island of Koh Tao working in eco-tourism. (Side note: In elementary school I traveledto Argentina, Chile, and Brazil and in high school I traveled to England, France and Spain.)
Trips on the List – Mongolia! Mongolia is at the very top of my list. I hope to go there with my boyfriend/travel buddy after we are done teaching English and saving money in South Korea. In the more immediate future, I plan to take a trip to Japan in the summer and go back to Nepal in the fall. I would also like to head back to Thailand and do some rock climbing in Railay. 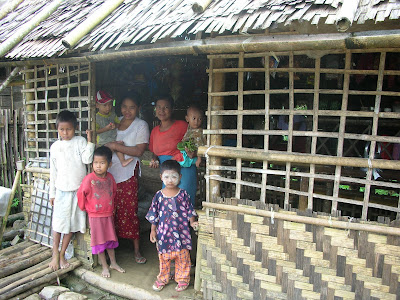 A logging village in Burma
Featured trip – The most epic five days of my life were spent traveling in Burma aka Myanmar in 2006. The trip is still hard for me to sum up so many years later. There were so many little things that made it incredible and such a departure from what I’d ever experienced before. The buses were all made before the 1980s and broke down every couple hours. The guides we had hired in one city turned out to be thieves who decided not to steal from us because we had treated them to so much beer and food. The fresh squeezed passion fruit juice enjoyed while sitting on the deck of a teak guesthouse looking out on lush green rice paddies as far as the eye could see. Dinners outside in the dark to prevent accidental bug consumption because they flocked to the lights. Trekking barefoot through sticky mud and elephant dung in the jungle next to a remote logging village. Watching endangered teak trees be chopped down, then dragged through the forest by elephants that were allowed to roam free when they weren’t working. Riding elephants through the jungle bareback. Peeing in a tree-house squatter toilet. Terrifying military checkpoints and riding in a Burmese motorcycle pack on non-existent roads through mud. River crossings with motorbikes atop sinking bamboo rafts. And having discussions about Burmese politics deep within the jungle, where no spies could overhear our talks and take our new friends into custody.
Teach, learn, share – Travel solo! I think everyone should have at least one adventure solo. It is so important! When you travel by yourself you are forced to really find out everything about yourself. Traveling alone is also the first time that many people are able to do exactly what they want when they want without anybody putting their two cents in and changing their mind. Before you “settle down,” travel solo! I guarantee you will learn new things about yourself and the world. 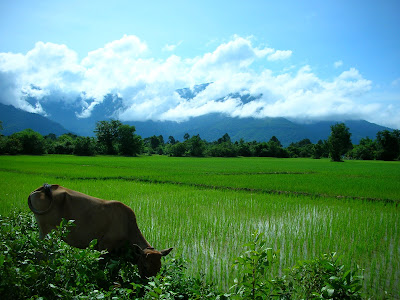 Rice paddies in Champasak, Laos
Worst Hotel – I was traveling through Cambodia and arrived in Siem Reap at midnight on one of those terrible tourist buses they seem to force backpackers onto. They unloaded the entire bus at some new looking cheap hotel that I’m sure gave the bus driver a huge commission, and after so many hours on the bus I didn’t feel like schlepping my backpack around town in the dark looking for a better place to stay. My new travel friend and I decided that the accommodations were acceptable enough, until we had both showered and noticed that there were little things jumping on the bed. Both beds were infested with fleas. I travel light, but I carry a few different types of bug spray in my pack, one of which is specifically for this situation. I sprayed my silk sleep sack with it and my sheets and did the same for my friend. When we woke up the next morning, there was an outline of dead fleas around each of us. It was disgusting and disturbing to say the least. I will never backpack without that spray.
Do you have any tattoos? – I am tattoo-free!
Posted by Unknown at 9:27 PM 2 comments: 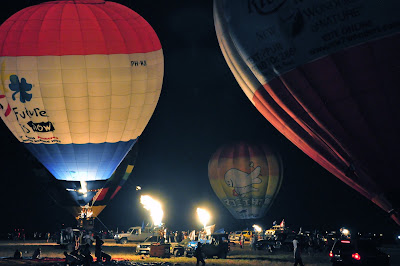 Image: Hot air balloons from all around the world coming to life in Clark.
I have teamed up with one of the best people in the world - seriously, this has been scientifically proven - and we have begun a business together.
I'm sure most of you know of Kiva because you are just that awesome, or because I have personally invited (or pestered) you to join. The idea of micro-finance and encouraging entrepreneurship in a country wrought with poverty is truly inspired. Thank you, bromigo Bill Clinton for making that commercial. Poverty is a very tricky subject, especially when dealing with entire countries and mind-sets. Microcredit is a great way to teach a man to fish rather than just giving him a fish.
Thus, my business partner and I have leapt into the world of microfinance. Our hope is to bypass the money-making incentives employed by finance companies, such as contract fees and exorbitantly high interest rates, and to provide a service that not only claims to spur entrepreneurship but one that really does help a people to make a living. We can do this by staying small and keeping away from words like "overhead" and "employees." We are envisioning a truly grassroots movement where money isn't applied for and loaned out, but one where money becomes a tool of prosperity that is passed around.
So now, when people ask me what I do, I will tell them that I help people buy hopes and dreams. Either that, or I will keep telling them that I own a whiskey bottling plant. It's a great way to make friends fast.
Posted by Unknown at 11:11 PM No comments:

After a three-week hiatus, it's finally back!
For the second installment of Wanderlust Wednesday, I'd like to introduce the lovely Kristina of DIWYY. She's got quite the collection of travel tales, enjoy!
Name - Kristina Wegscheider 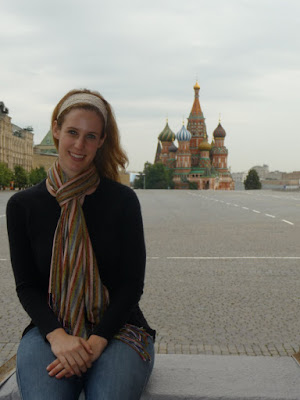 At the Red Square in Moscow, Russia in July 2009
Site - Do It While You're Young, www.diwyy.com

Occupation - Human Resources for a company in the high-tech sector

Current Location - My home base in San Jose, California.

Trips Made - I traveled to Europe with my family as a child but made my first trip abroad as an adult in 2002 when I did a winter break study abroad in Australia. Within a week of being back, I was booked on a summer study abroad to South Africa. That pattern has continued to this day. I have racked up over 50 countries and territories on all 7 continents. Let's just say I have a very large passport which causes some strange looks and interesting questions at any border checkpoint.

Trips on the List - Everywhere I have not been! The top five adventures I would like to do next are Trans-Mongolian Railway, Colombia, Sri Lanka, Botswana & Namibia and West Africa. 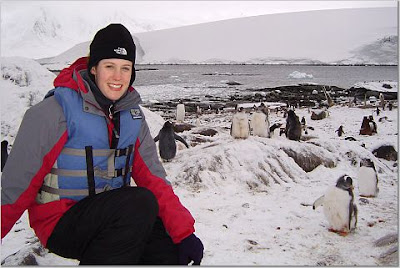 Antarctica in March 2005
Featured trip - I won a trip to Antarctica in December 2004 from Adventure Center and traveled in March 2005 on one of the last boats of the season. After spending nearly two and a half days in bed due to seasickness, we entered the Antarctic Peninsula which was truly magical. I have never seen a place so untouched and so serene. The wildlife is also very friendly and it is common for a curious humpback whale to be right next to you when you are in a zodiak boat! My favorite two moments were stepping foot on the Antarctica continent at Neko Harbour and getting my passport stamped at Port Lockroy in British Antarctic Territory.

Teach, learn, share - While some people will say frequent flier miles are useless, I boldly disagree! I have flown in international business class five times free of charge thanks to them! My advice to travelers is to find an airline alliance and stick with it. There are times when I pay a little more to fly my preferred airline but when I can check three bags for free or get bumped up to business class, it all seems worthwhile.

Worst Travel Situation Involving Luggage - I flew to Nairobi a few summers ago and got there no problem. My bags, apparently, had a different itinerary. Due to one delay from my departure city, it took three days for my bags to get to me. Worst part? I had decided to wear a summery dress and espadrille sandals on the plane and did not pack a change of clothes in my carry-on. As if my tall stature and blonde hair don't make me stand out, I didn't want to be wearing this outfit in public. So I stayed in my room at the Hilton for the entire stay. Way to see Nairobi! Lesson learned: always pack a change of clothes and wear something more appropriate next time on the plane! 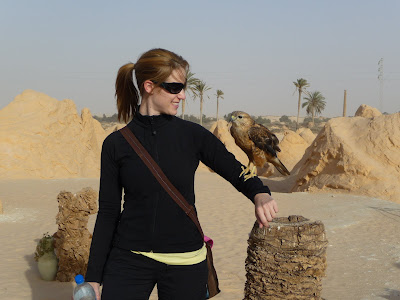 With a peregrine falcon in Debabcha, Tunisia in January 2010
Do you have any tattoos? - Nope!
Posted by Unknown at 6:29 AM No comments: