I "heart" Singapore and vice versa. 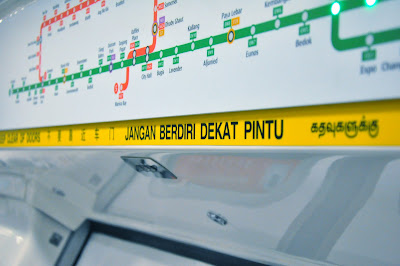 Image: Aboard Singapore's MRT. So many languages!
Walking around Singapore and meeting some very interesting people through some not so conventional avenues, I have come to learn a few things about the tiny island nation. Not only is Singapore a massive crossroad where many different cultures, peoples, and languages collide, Singapore is also an intricate conundrum of laws.
Disclaimer: the preceding information was accumulated solely by word of mouth and has not been confirmed through the rigors of Wikipedia.
Posted by Unknown at 7:04 PM