Have some milk, Hong Kong style. 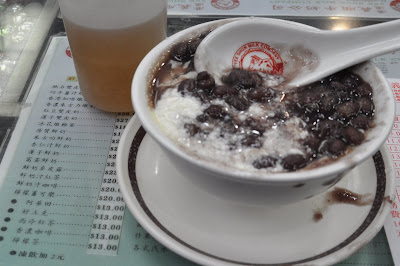 Image: Dun Nai (Milk Pudding) with red beans.
I excitingly pinged a good friend of mine from San Francisco the following, "I'M IN HONG KONG!!" The next thing I know is I get an email from her outlining a few of the places that I cannot miss while in HK. God, do I love having foodie friends.
Apparently, Yee Shun is an institution here in Hong Kong with several locations all over the mini-nation. The first one I tried was in Causeway Bay. Very easy to get to, just around the corner from the MTR station. Actually, there's an entrance to the MTR station a few stores down from Yee Shun. I don't remember the actual exit letter (HK MTR stations label their exits with letters for easier navigation), but this particular Yee Shun is fairly close to Times Square, so keep an eye out for that. Or, just walk around HK and you are bound to bump into a Yee Shun somewhere.
Hong Kong milk pudding is an odd, odd thing. I was expecting something more along the lines of bread pudding, or just pudding. You know, that pudding consistency as popularized by Bill Cosby. When my order came and I dipped my spoon into the bowl, which looks deceptively small, I was surprised by the gelatinous consistency. It's almost as if a flan went on a diet and had a love child with a mold of Jello, the resulting milk pudding inheriting it's parents' textures and consistency. If any of you are familiar with the Philippine dish of sweetened soft tofu, called taho, it's very similar to milk pudding in both flavor and texture.
As per my friend's suggestion, I ordered my first milk pudding with red beans. The red beans helped to cut the sweetness of the milk pudding down, helping me to better appreciate the flavors. The red beans also lent its slightly chalky texture to the dish, complementing the silkiness of the milk pudding very well. 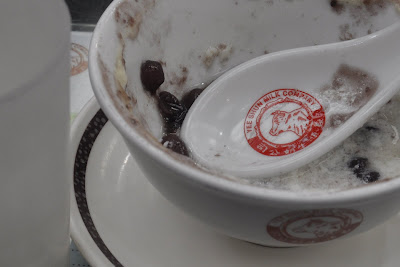 Image: Milk pudding all gone.
All for about $25HKD, approximately $3USD, you get a big bowl of steaming milk pudding topped off with red beans and a tall glass of piping hot tea to wash it all down with. It was cold and raining when I first had Yee Shun's milk pudding. I can't think of a better way to duck out of the wet cold HK streets.
Posted by Unknown at 10:07 PM