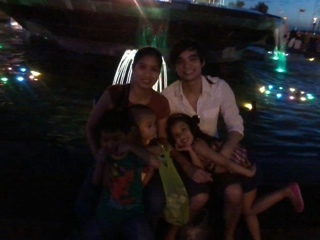 Image: Hanging with some family at the 4th largest mall in the world (according to Forbes).


So how do I followup with a three-month hiatus? With a four-month hiatus! That's the secret to success, people. Always outdo yourself. Always.

So, what have I been up to? I haven't done one of these highlights list in a while, so I guess this would be the perfect opportunity. Here goes (in somewhat chronological order):

- As per previous post, I was the editor of a magazine. Which was just... Crazy.

- I was on television and radio. Seriously. I have proof.

- Got into another bar brawl and almost got stranded at the local jail.

- My netbook was stolen by some drug addicts (seriously, unfortunately).

- Was about to get a tattoo of the closing line of Ionesco's Rhinoceros which reads, "Je ne capitule pas!" But as I was about to get prepped, the entire city went into a blackout. Yeah, so I just went out and got drunk instead.

- In a quarter-life crisis induced frenzy, I applied to a grad school in Spain. I think I got in. I might need to brush up on my Español.

- In the cortisol induced stupor proceeding the aforementioned quarter-life crisis, I turned off all of my electronics and hibernated-slash-meditated for an entire week. Some friends thought I died and in gentlemanly fashion, went to the nearest pub to toast my beautiful life. Live fast. Die young. Cheers!

- After hearing about their awesome night at the pub, I wrote a story about a guy who fakes his own death just to see who goes to his funeral but then, gasp, it turns out he really is dead and is just a ghost with schizophrenic tendencies! Then I slapped myself for making up such garbage.

- My mother came to the islands to try to bring me back to America. I said no. She gave me an iPad. It was an interesting exchange.

- I discovered twitter and now my insomnia is worse.

- Previously mentioned friends (who toasted my assumed death) decided to throw me a birthday bash. I was a total ass and didn't show up. My neuroses don't allow me the luxury of friends. Apparently.

- Bumped into some folk I met last year on a boat headed for Bali. Small world.

- Discovered Hipsterville, Philippines. It's like Brooklyn but in a jungle.

- Went to a party on a farm on a mountain. It was hot and sticky and I got diarrhea.

- Went on a road trip to Vigan and discovered a 300 year old mansion that's been beautifully restored and is now a luxury hotel. My travel companion and I were asked to model for their promotion materials (I'll post the shots as soon as I get them, maybe). They paid us in wine.

- Currently planning my escape from this archipelago to search for some adventures in Australia. Also, koalas.

One of the highlights above is complete fiction. I mean, SRSLY guys, I'm crazy but not crazy crazy. Have fun guessing which item is made up!
Posted by Unknown at 3:57 AM