Mosquito bites on my face - my FACE. 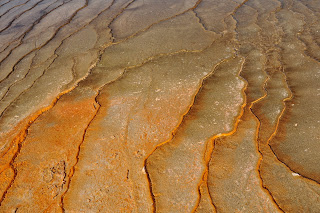 No, the above photo is not of Mars, but lately I have been feeling like I am suddenly on another planet. It's a shot I took while still at Yellowstone. This great American wilderness is absolutely wild.

As with the previous post, too much is happening for my feeble little mind to process. Thus, I am throwing another little list of highlights at you, my little handful of readers.

- Met the Jolly Green Giant in Blue Earth, Minnesota. Looked up his skirt/toga thing. It was very awkward.

- Skipped rocks along the great Mississippi River, then laid on a dock once I had exhausted the river bank of its primo flat skipping rocks. The sky seemed extra blue.

- Spent a few days on a Wisconsin Dairy Farm. Learned the delicate chemistry behind creating cow feed, rode on a tractor, harvested honey from a few bee hives, saw a cow giving birth. Making tunnels in cottonseed should be a game all American children play while growing up.

- Attended a traditional Wisconsin Friday Night Fish Fry where I was reprimanded by Grandma Brown, "Don't get any more tattoos because tattoos are ugly!" The next day she gave me a bag of her homemade cookies and I hugged her more times than I can count.

- Drank Spotted Cow on the back of a pick-up parked on the highest point of Observatory Road while staring up at the stars. Talked about life while living it.

- Finally made it to Chicago. Did a whirlwind walking tour of downtown and somehow ended up at the rooftop party of a friend of a friend of a friend's awesome Lincoln Park condo. Sometimes I feel like my life is a movie, this night was one of those nights. The people were awesome and the Chicago skyline from the roof deck was breathtaking.

- At the aforementioned rooftop party, Road Trip Buddy Jeff filled up too much with 312s and caipirinhas and started telling everyone that I spiked his drinks so we had to leave. The cab driver was from Somalia and we talked about Ohio.

- Met up with another friend of a friend in another part of Chicago and decided it would be a great idea to sneak into Lollapalooza. Successfuly got in once, but had to leave to see why Road Trip Buddy Jeff didn't get in. Tried to get in again, but failed miserably.

- Found two ladies who were also trying to get into Lollapalooza and together we cooked up an elaborate scheme to get all four of us in. As we walked to another gate to set our plan into motion, they suddenly disappeared. My pal and I ended up going to REI because I still have a hefty Member Dividend to use up.

- Reconnected with the friend of a friend who did successfully get into Lollapalooza. Had some tapas and sangria, played some pool, and ended up at Kingston Mines, the coolest blues bar in the world. One of the bands played a bluesified Santana song so we just had to dance. Met a few random people and taught a Chicago chef the spirit of omakase.

- Sweet Home Chicago is an actual song and is in fact my new favorite song.

- Drove into and through Ontario, Canada where we were quarantined and questioned twice. Apparently people take legal documents very seriously in the great land of maple leaves.

I am excited to ruminate on these past adventures. Thanks for reading all of this nonsense. Tchau!
Posted by Unknown at 8:04 PM