We brave bear attacks and all. 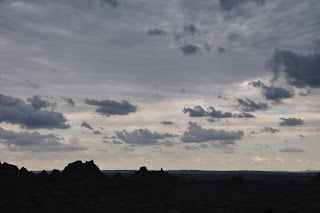 Currently typing up this post in a coffee shop in Spearfish, South Dakota. Literally, the most civilization I've had since my last post in Idaho (what day was that and what day is it now? I've lost track of time).

It's only been a few days but so much has happened and I have not yet fully digested and distilled these past events, so I think I will simply list a few highlights:

- Finally made it to Yellowstone. Explored every geyser, hot spring, and valley. Absolutely the most breathtaking park I have ever been to. I wish I had more photos of the place, but my skills with a camera are far too inadequate to justly capture the sheer awe that is Yellowstone. Camping in Yellowstone is cold.

- Met a 67 year old motorcycle nomad named Rutt Stunns. He outlined how one could conceivably get two baths out of one water bottle. His logic was sound.

- Camped in South Dakota. Found that Lysol is a good alternative to lighter fluid. Gin is not.

- Met a diner waitress named Memory who told me to follow my dreams as she gave me a big hug. She also seemed to have an unnatural affinity for reptiles and a visceral hate for "getting stuck."

- Discovered how fun writing/sending postcards can be (send me your complete address if you want to get some of the most random postcards, ever).

- Went to Mount Rushmore. Got reprimanded by a Park Ranger and was asked to turn my track jacket inside-out. Apparently, middle-America found the acronym FCUK to be incredibly offensive. I made little children cry.

- Went to the Badlands and got caught in a thunder storm. I'm pretty sure I developed carpal tunnel syndrome from holding up my camera for so long trying to capture a shot of lightning. Lightning in the plains is quite a sight.

- While driving, birds would kamikazee themselves into the windshield. Pretty countryside birds like in the Disney movies, not ugly pigeons like the ones we have in cities. I'm worried about how this will negatively affect my karma.

- Went to a bar in the middle of the biggest biker rally in the world in Sturgis. So much leather and denim cut-off vests. I want a motorcycle.

That's about it for now. Off to the next adventure. I'm thinking Minnesota or maybe Iowa? I promise I will come up with something profound and meaningful to say. Soon. Maybe. Mahalo.
Posted by Unknown at 7:10 AM