When I first began this journey almost three years ago, I didn't really know what I was doing nor what to expect. All I could feel was this overwhelming need to be somewhere else, to be everywhere else. I had a lot of ideas but no particular direction. So I sold my car to a friend and hit the road. East, I said. From San Francisco to New York. Hit as far east as I could in the United States. More east, I said. Explored Asia and South East Asia. Now what? West, maybe? Arrived in Buenos Aires, Argentina with a knapsack of random Spanish words and an inkling of grammar and syntax.

When I first arrived, I tried to work on a polo ranch, but that failed. So I continued writing my 12 cent articles and picked up random gigs at hostels to avoid paying rent. Couchsurfed. Couchsurfed a lot. Taught some yoga, worked in bars, worked in a restaurant, tried to start my own restaurant. And somewhere along the way, I made a little family of friends. Random misfits from all over the globe, for some cosmic reason, coming to Buenos Aires, fitting perfectly into the nooks and crannies of my heart. And I learned to smile from the inside.

For the first time in a long time I thought, I could stay here. I can stop moving.

But, in a few weeks shy of a year, I find myself hitch hiking to the southernmost tip of the world, scheming free passage into Antarctica. And why, I ask myself. All I can answer (to myself, because I'm a little insane) is... Why the fuck not?

I don't know where I am going with this, but that's not to say I don't have a point. Everything has a point, a reason. I imagine the universe as an infinite body of water, calm and turbulent at the same time. Every action, every thought, every held breath sends outward ripples. Ripples colliding with other ripples, syncopating sine and cosine waves, making beautiful tapestries of patterns on a surface that is constantly undulating, forever transforming.

So, here's a ripple. Maybe someday it will meet another ripple, and in the pattern they make together, some sort of meaning will be born. 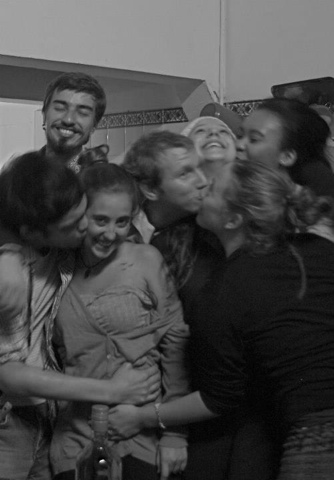