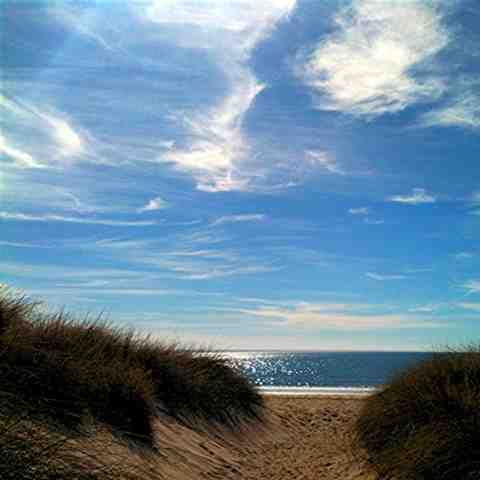 It was still dark out when Miguel came knocking on the truck. Time to head out. We drowsily rearrange the contents of the carriage, pull out the makeshift stove from the day before, boil some water, pour the mate herb into the gourd with a little sugar, pour the water, sip, pour, pass, and we were off.

Miguel was obviously hung over so we rode in silence. We pass two tiny towns before Miguel informs us, rather somberly, that Puerto Madryn is a ways off of the highway. His proper Spanish was back so my ears didn't have to bend over backwards, getting lost in translations, stitching meanings to sounds. He said he would drop us of at the junction, and from there we could hike about five kilometers to town center or we could try hitch a ride. When we reached the junction, we hopped off the truck. A little over 12 hours from when we left the Estanga home, we had made it about 700 kilometers. Not bad.

"Mucha suerte y buen viaje! Cuídense, locos!" Miguel yelled as he waved, honking his horn as he drove off, continuing down Ruta Nacional 3.

We crossed the junction from the national highway into a feeder road and began walking. Thumbs coming up as vehicles passed. No one stopped. The road went downhill from the highway, causing cars and trucks to coaster at a speed inconvenient to stopping for hitch-hikers. We didn't mind too much. It was kind of nice to stretch out our legs after being cooped up in a truck for so long. We breathed in the cold air and passed the guitar back and forth, strumming chords into combinations to fit the landscape.

As we round off the main highway, the cliff gave way to the sea. I looked, blankly at first before it registered. This was the first sight of sea my eyes had taken in since leaving the Philippines almost a year ago. Before Buenos Aires, I had always lived by the ocean. Buenos Aires was a port city, but its waters formed a river, with Uruguay looming in the distance. Here, there was only open ocean. It was still early morning and Puerto Madryn was still clinging to a thin, misty fog. I thought of San Francisco, California. It was beautiful.

At the border of the town, there was a check point. There are check points all over Argentina, where officials check to make sure you aren't bringing in anything non-native and highly invasive. Some check points spray vehicles with some sort of pesticide for extra measure. I looked at this check point from a distance, wondering if it was being manned at the moment. Didn't look like it. Vehicles passed without stopping. Good. No problems.

As we got closer, I noticed a uniformed man stepping out onto the sidewalk, taking his post. He was wearing a bullet-proof vest. He looked ready for battle. Fuck, what do I do? My mind started to run, will he shoot me for not having documentation? We got closer. I got more nervous. I take note of my pace. Too fast and he might ask, "What's the rush? Are you a terrorist? Show me your papers!" And I'm fucked. Too slow and he might ask, "Why are you walking so slowly? Bag too heavy? What are you hiding in there, bombs? Show me your papers!" And I'm fucked.

We got close enough for eye-contact but I coolly avoided it by casually looking over the guitar as I non-chalantly slung it over one shoulder.

Fuck, did this look too movie-like? Was this attracting more attention?

We arrived at a distance that required eye-contact so I look in the guard's direction.

He was looking away.

I smiled and gave him a slight nod. He did the same. And I continued to walk past him, trying to keep from running as far away as possible before he realized he could stop me and ask for documents I didn't have. But after a few deep yoga breaths, I found my center and I was able to continue in the same non-chalant pace.

We'd passed a few of these control check-points with Miguel on his truck, but they never seemed to notice us stowed away in the carriage. This was in the broad light of morning and we were clearly foreigners. We were bound to have something not suitable for passage. But nothing. Just a smile and a nod. Maybe it wasn't such an impossible feat after all to try to hitch-hike into Antarctica without a passport.

Then I realized, that was just a city border. The guard was probably still half-asleep. Antarctica might be a bit more complicated.
Posted by Unknown at 11:01 PM