I ate some stuff in Macau. 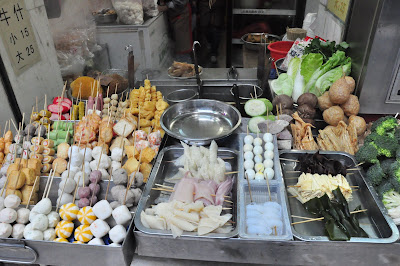 How beautifully frightening is that strange cornucopia of colors, shapes, and textures? What made this more fun was the fact that the vendor did not speak a lick of English. That's what I get for wandering into Macau's alleyways. At least it was just a few bouts with language barriers and not something worse like oh, say, rape.
It was totes crazy trying to get some food, but I was starving so I tried my damndest. Luckily, I remembered my Kanji studies from way back in high school and although Japanese sounds very different from Cantonese, the characters are the same. So I recognized the characters next to the numbers 15 and 25 to mean "small" and "big," respectively. Alright, so 15 Pataca for a small order and 25 Pataca for a big order. I pointed at the number 15 and said, "CHIISAI." Blank look from vendor. Ok, so Japanese word for small is not the same in Cantonese. Ok, how about, "PEQUENO?" Is that Spanish or Portuguese? Both? Blank look again. Fuck. I am going to die of starvation.
Finally, I pulled out 15 HK Dollars (Hong Kong and Macau currency are pretty much equal in value and most of Macau accepts HKDs) and made a gesture to my mouth. The vendor laughed and started saying something to me, very loudly. I think she was asking me what I wanted to eat, so I made a general gesture at her entire stock as if to dare her, give me your worst.
And boy did she deliver. She handed me a stick of colorful (squid?) balls, a stick of what I think was tripe (?), a stick of tentacles, and a stick of some sort of green leafy thing. All four sticks were quickly blanched in boiling water then drenched in a spicy, peanuty sauce. It was a feast, albeit unorthodox, all for under $2USD, but I think the vendor gave me some free food because she was so amused by my pantomiming skills. 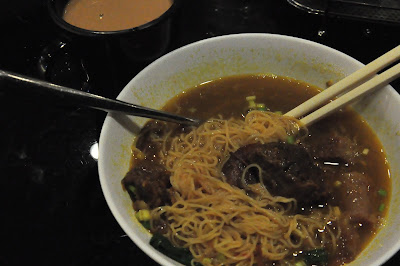 This was a much easier meal to obtain since it was in a restaurant off of one of the main tourist thoroughfares in Macau. Although the waitress couldn't really speak English, there was at least a menu that had pictures with a smattering of English words so I managed a little better. This is some kind of a braised beef in a curry noodle soup, all washed down with a very Macanese drink that is half coffee, half tea with a little milk and sugar.
USEFUL TRAVEL TIP: In Macau and Hong Kong, McDonald's does this great thing called Happy Hour. Usually it's lunch time (12PM-3PM), but some branches do it all day. During their Happy Hour, you can get an entire Big Mac meal for 25 Patacas (approx. $3USD). I know, why go all the way to Macau just to eat at a McDonald's? Uhhm, some people are allergic to tentacles...?
Posted by Unknown at 7:26 AM